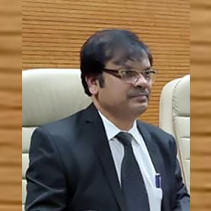 He has been a post-doctoral research fellow at Harvard Kennedy School, USA, holds a Ph.D. in Management, MBA in Finance and Masters in Economics.

Public policy has been his passion in professional and academic life. He has demonstrated a leadership role in conceiving, designing, and implementing policy and regulation, especially on renewable and electricity market design in India. He has played a pioneering role in introducing the Electricity Act, 2003; Renewable Energy Certificate mechanism; Security Constrained Economic Dispatch; Real Time Market; market based Ancillary Services.

He has been / is a part of several Committees constituted by Ministry of Power, CERC, Forum of Regulators, and South Asia Forum for Infrastructure Regulation. He is a regular guest faculty in several institutions in India/abroad.  Dr. Chatterjee has been nominated as the first President of Indian Association of Energy Economics.